Located near the French Broad River, this part of the city serves as a gateway into the River Arts District. Most of the new residents who choose to move here are young and hip with a desire to live near all the quintessential hangouts for beer, good food, and fun times. The median income in this part of the city is about the same as everywhere else near Asheville: just under $45,000. However, West Asheville is a bit more unique than other parts of town. It's a historic area which dates all the way back to the 1800s when the United States Post Office gave it a name. Fast forward over a century, and West Asheville is now filled with cool eateries, local shops, cafes and a variety of other businesses on and around Haywood Road. New houses and subdivisions are constantly being developed, and the price of homes has more than doubled in the past decade and a half (from around $73 per square foot to $187. 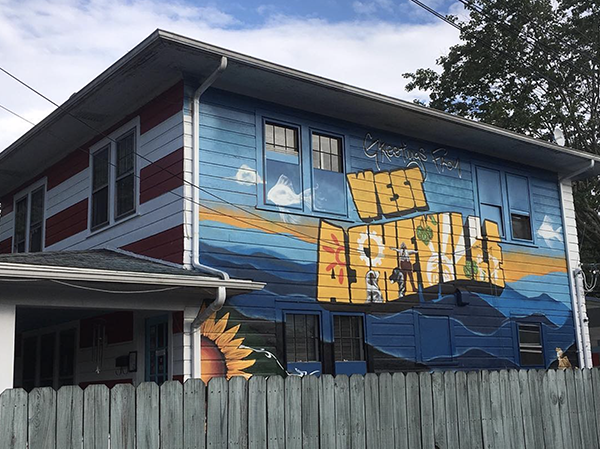 You won't visit many other cities in America with the variety of delicious food that West Asheville has to offer. Asheville itself is widely known for local breweries and delicious restaurants. There are over twenty different breweries in the area, and the city boasts more of them per capita than any other in the US! Asheville is heaven for beer lovers, as it also serves as the Southeastern headquarters for both the Sierra Nevada and New Belgium breweries. Food is plentiful as well. There are over 700 different restaurants in and around Asheville. Local farms keep virtually all of the food fresh here; vegans and foodies will never want to leave!

Music lovers, prepare yourselves for exciting concerts most others can only see in big cities! Places like the famous Orange Peel have attracted superstars including Skrillex, Bob Dylan, Willie Nelson and Kansas. One popular travel website even ranked Asheville in the Top-10 for "America's Greatest Music Cities" which included other hot music towns like Austin, Texas. Music fanatics can also enjoy festivals like Moogfest, LEAF Festival, Shindig on the Green and the Saluda Arts Festival. You won't find many other smaller towns in America that pull in the type of artists that Asheville can.

This part of North Carolina is well known for top-notch educational rankings. In fact, several public middle and high schools in the area are ranked Top-100 statewide. Class sizes tend to be slightly smaller than the national average, and high school graduation rates are higher than most other cities in the state. UNC Asheville, Asheville Buncombe Technical Community College, South College Asheville, Warren Wilson College, Montreat College and Blue Ridge Community College are just a few of the schools within 20 miles of Asheville. Local students have a wide array of choices for a quality education without traveling far from home.

The data relating to real estate on this website derive in part from the Internet Data Exchange program. Brokers make an effort to deliver accurate information, but buyers should independently verify any information on which they will rely in a transaction. All properties are subject to prior sale, change or withdrawal. Neither the publisher of this website nor any listing broker shall be responsible for any typographical errors, misinformation, or misprints, and they shall be held totally harmless from any damages arising from reliance upon this data. This data is provided exclusively for consumers’ personal, non-commercial use and may not be used for any purpose other than to identify prospective properties they may be interested in purchasing. © 2019 Carolina Multiple Listing Services, Inc. Based on information submitted to the MLS GRID as of "Updated" date listed below. All data is obtained from various sources and may not have been verified by broker or MLS GRID. Supplied Open House Information is subject to change without notice. All information should be independently reviewed and verified for accuracy. Properties may or may not be listed by the office/agent presenting the information.

Listing information provided courtesy of the High Country Association of Realtors. IDX information is provided exclusively for consumers' personal, non-commercial use, and it may not be used for any purpose other than to identify prospective properties consumers may be interested in purchasing. The data is deemed reliable, but is not guaranteed accurate by the MLS.